Can eating like a Greek relieve your reflux symptoms? A recent study on the Mediterranean Diet seems to say yes.

At the end of 6 weeks, researchers assessed both groups again. Surprisingly, researchers found a 6 point reduction in acid reflux symptoms in 62.6% of the group that followed the Mediterranean and alkaline water diet—an 8.6% advantage over the medication group. (1)

Incidentally, other researchers conducted another study among Albanians and also found that the Mediterranean diet is associated with a decreased risk of acid reflux, regardless of social economic status and other factors. (2)

Altogether, this study seems to indicate that eating Mediterranean food and drinking alkaline water is just as effective, if not even more effective than PPI medication. Diet seems to play a significant role in treating GERD (gastroesophageal reflux).

We don’t understand exactly how the Mediterranean diet reduces the risk of GERD but it may have something to do with its general health benefits.

In this article, I’m going to break down exactly what is in the Mediterranean diet and talk about how each component can be beneficial to your health and help with acid reflux.

What exactly is a Mediterranean Diet?

An American physiologist named Ancel Keys was the first one to coin the term “Mediterranean diet” in a 1960s study called the “Seven Countries Study.”

In the study, Ancel examined the diet, lifestyle, and health status of 12,763 people from the United States, Finland, the Netherlands, Italy, Greece, former Yugoslavia, and Japan. (5)

Ancel found that there were lower rates of mortality and incidence of cardiovascular disease in countries that overlooked the Mediterranean sea, namely Italy and Greece. Hence, the term “Mediterranean diet” was born.

Let’s take a look at each pillar and see how they can impact our health.

Seems like we all know that fruits and vegetables are good for us, but did you know that they actually contain chemicals that prevent chronic diseases like cancer? (6)

The power of fruits and vegetables to fight and protect against disease is due to their high amounts of phytochemicals. Phytochemicals decrease inflammation and heal the body. (7)

In order to understand the impact that fruits and vegetables have on our health, it is important to understand how diseases generally occur in the body.

Technically, we all have low amounts of free radicals and oxidants floating around in our bodies, so in that sense, it’s normal. But on the other hand, an overload of these agents can lead to cellular damage, a phenomenon known as oxidative stress.

But get this: fruits, vegetables, and medicinal plants contain anti-oxidants. Antioxidants work to neutralize free radicals and oxidants and prevent them from causing cellular damage. (10) This is a crucial component of what makes the Mediterranean diet so healthy.

There have been numerous studies that demonstrate the power of fruits and vegetables to prevent disease and reduce oxidative stress. Here are just a few examples:

And that’s just the tip of the iceberg. There are literally hundreds of fruits and vegetables that fight disease and promote health. Dr. Michael Greger in his book, How Not to Die, recommends at least 3 servings of vegetables per day. (13)

Whole grains are the second pillar of the Mediterranean diet and have consistently been shown to have numerous health benefits. Whole grains have been associated with lower rates of type 2 diabetes, cardiovascular disease, metabolic syndrome, respiratory diseases, infectious diseases, hypertension, stroke, and even some types of cancer. (3)(14) (15) (16)

There are several ways that whole grains benefit our body. For example, whole grains increase the microbiome diversity ratio in our gut. (16) Secondly, whole grains improve systemic inflammation by reducing a chemical in our bodies called plasma intraluken-6. (17)

Additionally, the indigestible fibers in whole grains are fermented in our gut. This may improve glucose regulation and help appetite control by delaying the hunger hormone, ghrelin. (14)

What are Whole Grains Again?

If you didn’t know already, whole grains are the intact flaked fruit of the grain. After the inedible parts of wheat(hull and husk) are removed, the starchy endosperm, germ, and bran are left. We call these parts “whole grain.” 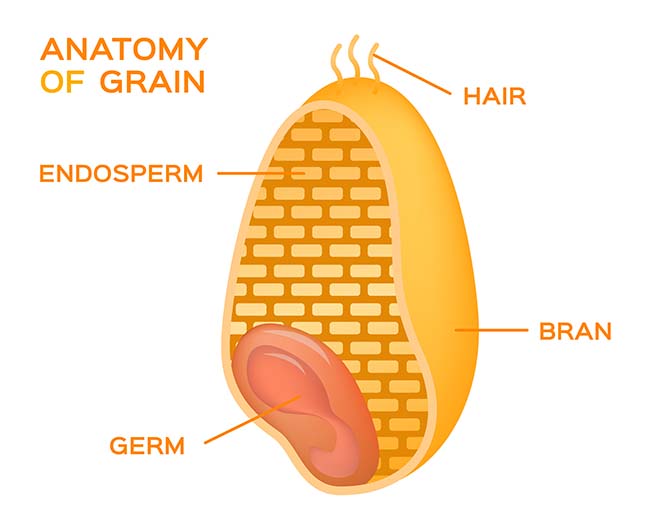 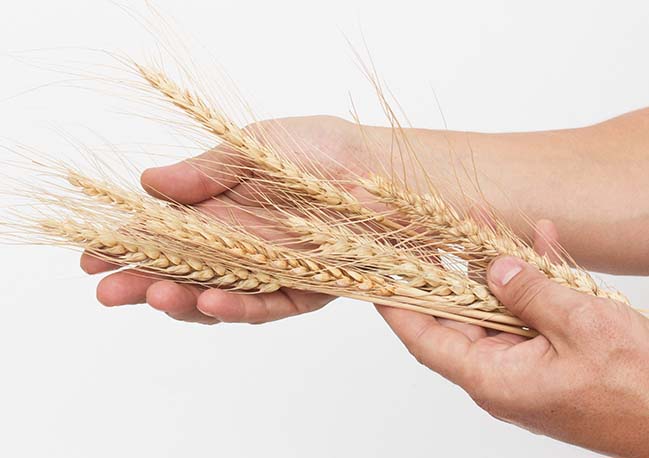 Grains not yet husked or hulled. 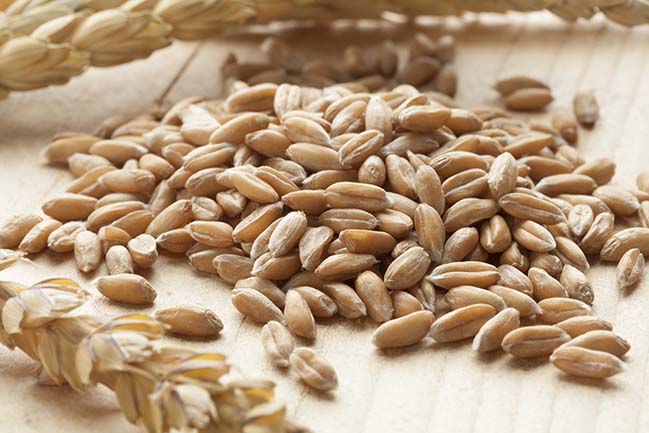 Grains that are husked and hulled.

The next pillar of the Mediterranean diet is beans. Although beans are not foreign to the American diet, they tend to be shunned as a “gassy” food.

But the truth is that beans are super healthy. A cup of beans contain a significant source of protein, fiber, vitamins, and minerals like folate, magnesium, zinc, and iron. In fact, people with the longest life expectancy in the world eat plenty of beans. (15) (16)

There are many compounds in beans that are responsible for their healing properties including enzyme inhibitors, phytoestrogens, oligosaccharides, saponins, and phenolic compounds.

In another study of rats with colon cancer, researchers found that rats fed a daily diet of beans versus rats fed a standard diet had a 44-75% reduction in colon cancer growth. Bean-fed rats also had more controlled appetites and lower body fat. (18)

Fish is another important component of the Mediterranean diet. Fish contains many different nutrients and vitamins that your body needs such as high-quality protein, vitamins A, B, D, E, iron, zinc, selenium, and omega-3 fatty acids. (18) One study showed that fish can lower coronary heart disease and improve sleep quality. (19)

Unfortunately, fish in the 21rst century is NOT like the fish ancient Greeks ate in their day and age. Due to technology and industry, almost all ocean-caught fish is contaminated with mercury, chlorine, insecticides, and other environmental pollutants. (20)

As further proof, scientists have found high levels of mercury in the blood and skin of Atlantic bottlenose dolphins near the coast of Florida. This indicates smaller fish dolphins eat and even smaller fish down the food chain are tainted with mercury. (21)

This is a serious public health concern because mercury is a dangerous carcinogen known to stun prenatal development and damage the brain. Mercury can also damage the immune system and cardiovascular system. (21)

Given these risks, it’s best to eat fish moderately—if at all. The recommended frequency is about 2 times per week.

Finally, the Mediterranean diet contains very small amounts of red meat. In ancient Greece and Italy, meat was not widely available so people depended on beans, legumes, and rice for protein.

If an ancient person from the Mediterranean wanted meat they would have to go out and hunt it themselves. Or, if they got meat from a butcher, it wouldn’t last very long. The point is meat wasn’t available year round so their diet didn’t contain much of it at all.

Turns out that kind of diet might have been best because today we know that red meat is associated with a whole slew of diseases like coronary heart disease, stroke, type 2 diabetes, and all types of cancer. (3) (22) (23) (24) (25)

In point of fact, the evidence is so overwhelming that you could say red meat consumption leads to cancer. We have known about this for years.

There are several chemicals in red meat that make you sick.

First, there’s nitrite. Nitrite is a chemical that is added to processed meat in order to kill and prevent the bacteria Clostridium Botulinum. This chemical is also what gives cured meats that characteristic red-pinkish color. Nitrites, along with another compound called nitrates can increase the risk for cancer. (26)

Also found abundantly in red meat, is heme iron, an agent that can increase the risk of stomach and esophageal cancer by causing oxidative stress and DNA damage (28)

On top of that, cooking red meat at a high temperature(frying or grilling) forms dangerous mutagenic chemicals like HCAs, PAHs, MeIQx, and DiMeIQx (27)

In short, the less red meat eaten, the better!

Olive oil is used a lot in the Mediterranean diet and can have some benefits. For example, extra virgin olive oil tends to have mostly unsaturated fats(good fats) and is low in saturated fats(bad fats). This is beneficial because the body needs healthy fat to function.

Olive oil use should be reduced to the bare minimum as some studies have shown it can impair artery function and increase the risk for cardiovascular disease. (28)