How Long Can Acid Reflux Last? 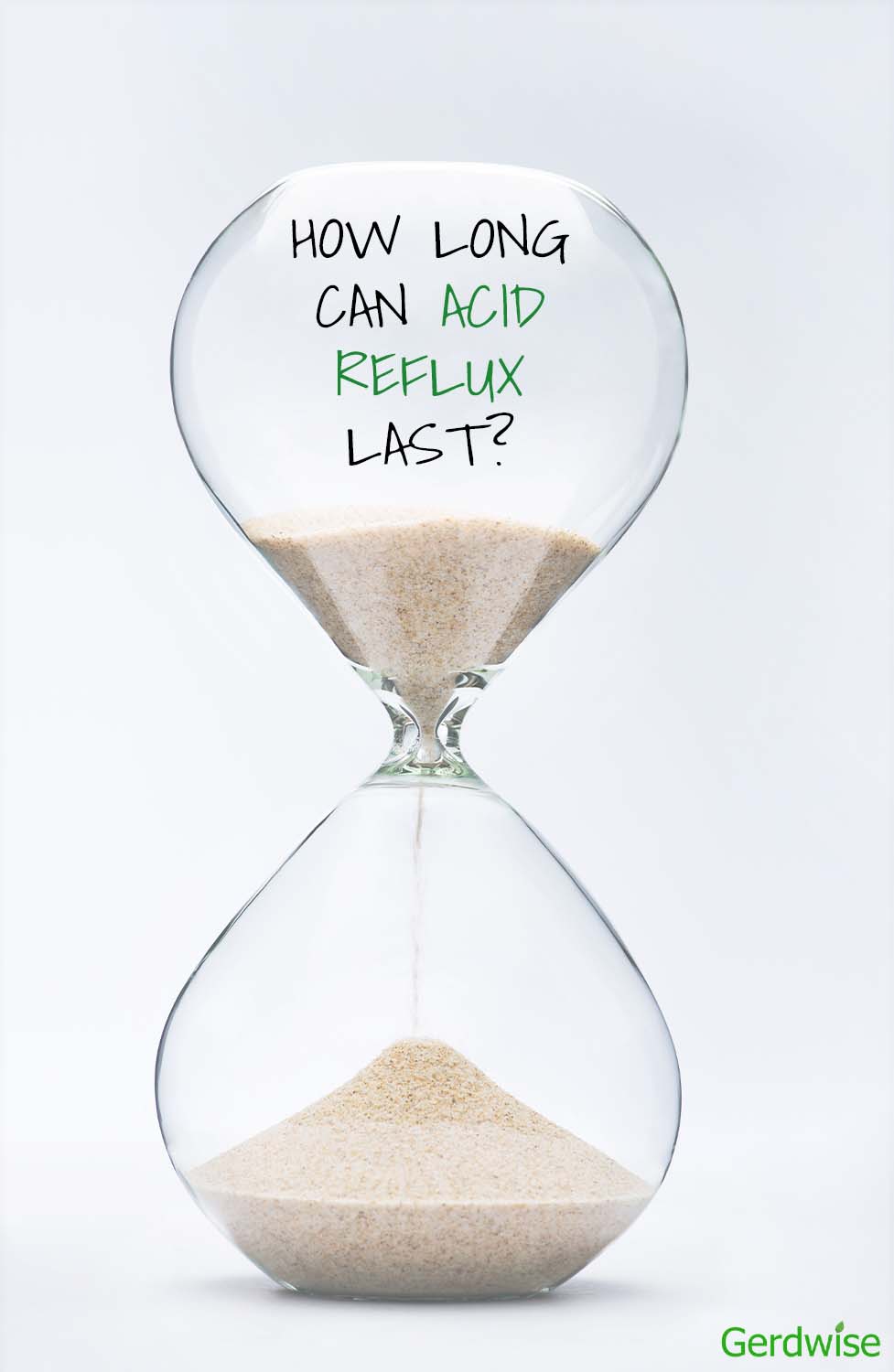 If you’re suffering from irritating acid reflux that is affecting your work, mood, relationships, and mental health, you might be thinking: when in the world will this go away? I just want my life back!

The answer may not shock you but if you read on, I’ll tell you why the answer might actually encourage you and give you hope…

So how long can acid reflux last? The answer is: it varies from person to person.

Some people can experience reflux for months at a time due to a stressful event in their life, and then be pretty much normal for the next six months to a year with little to no reflux.

On the other hand, someone else could be instructed to take acid-suppressive drugs indefinitely and struggle with acid reflux for years…

The Sporadic Nature of Acid Reflux

Interestingly, many reflux sufferers seem to experience their symptoms sporadically—several months with reflux and then several or even many months without any symptoms at all.

Check out what this study led by Dr. Metz from the University of Pennsylvania, School of Medicine had to say about the seemingly transitory nature of reflux:

This has led many in the medical community to advocate for “on-demand” PPI therapy—meaning you only take PPIs when you need them.

And actually, multiple studies indicate that on-demand therapy is just as effective as continuous PPI therapy, particularly for patients who have only mild esophagus inflammation(esophagitis).

I know the fact that reflux symptoms just seem to come and go as they please can be super frustrating and confusing to you, but don’t give up! To me, this is further evidence that other external factors are influencing reflux in many patients—which means your reflux could potentially go away if you focus on certain lifestyle factors such as diet!

The Impact of Stressful Life Events on GERD

Did you know that stressful life events can not only cause reflux symptoms but can also impact how long GERD symptoms last? Talk to any GERD sufferer and they’ll probably tell you about the significant role stress played at the onset of their GERD symptoms.

Take a look at what this study has to say about the influence of stress on GERD:

Apparently, job strain and dissatisfaction can increase your risk of getting GERD two-fold when compared to people reporting high job satisfaction.

Now, this could just be due to the fact that people suffering GERD generally feel dissatisfied with many things in life because they’re constantly sick. However, in my experience, stressful jobs tend to exacerbate GERD significantly because of ever-changing work and break schedules.

There is usually no consistent routine and this can throw off eating times which could impact digestion and reflux symptoms.

Given the fact that most of us will spend about one-third of our lives at work, job strain and dissatisfaction are important factors to consider when it comes to treating GERD effectively.

With that said, let’s take a look at some more stressful life events that could potentially cause or exacerbate GERD.

Pregnant women are known to get acid reflux due to the fetus pressing on their stomach. This increases internal pressure and causes the muscle between the stomach and lower esophagus(called the LES) to relax.

When the LES relaxes, stomach contents can “reflux” back up, but this usually resolves after delivery of the baby.

Speaking of babies—did you know that pretty much all babies will experience some reflux growing up? It’s a cause for concern for many parents but according to the medical literature, baby reflux will usually revolve by 12 months of age.

I know this may feel a bit uncomfortable for some folks because of social pressure and a generally harmful Western food culture, but the fact is that obesity is a major cause of acid reflux.

For example, did you know that as high as 70% of obese patients have GERD? Too much fat particularly around our organs in the abdominal region causes more pressure on the lower esophageal sphincter(LES), allowing it to relax more often. This increases the chance for GERD.

Studies have shown that weight loss can dramatically reduce or eliminate GERD symptoms altogether, which depending on your body fat percentage, could take a month or two to several months.

Stress-induced GERD: An Indication that Reflux is a Transient Condition, not a Permanent One

All of the life events mentioned above can impact GERD symptoms which indicates there are external factors we can control to at least improve and manage our symptoms.

This is good news and goes against the theory that GERD is a permanent disease in which we have no agency over!

How Long did it take for my acid reflux to go away?

I was first diagnosed with acid reflux in 2012 when I was working in a high-stress environment(I sold cars in college for a while).

I was told that the reason for my vocal loss was due to an incurable disease called acid reflux. I was given PPIs and instructed to take them for life.

So for about 2 years, I took them without fail, every day, but once I got my voice back, I stopped.

And for months, I felt great. NO reflux. At least for the time being.

However, a year later, in September 2013, in the midst of high stress again, I woke up with no voice, yet again.

When I lost my voice initially, it took about 3-4 months to get it back, but after losing my voice for the second time in 2013, my voice and reflux symptoms got much worse and didn’t really go away until early 2017. So that’s basically 4 years until I made a complete recovery.

A little scary, I know, but again let my story serve as an encouragement to you because it suggests that external lifestyle factors impact GERD symptoms and how long you might experience those symptoms.

If you improve your digestion, it could take anywhere from a couple of months to a year before you start feeling better(there is an abundance of studies tying GERD with indigestion).

In conclusion, keeping a positive outlook and striving to change your lifestyle to reduce stress can indeed minimize GERD symptoms.

Moreover, doing so could potentially save you from going down the path of PPI dependency, negative PPI health consequences, and possibly serious, life-altering surgery.