Constant, long-term acid reflux disease can lead to complications like peptic strictures, erosive esophagitis, Barrett’s Esophagus, and esophageal cancer. Erosive Esophagitis(ERD) refers to the inflammation of the esophagus caused by prolonged acid exposure and is characterized by red sores, lesions, and ulcerations on the esophagus, known as mucosal breaks.(1) Mucosal breaks are identified on a scale of A-D, called the Los Angeles criteria. (3)

Small single erosions that are classified smaller than 5cm are identified as grade A.(1) Erosions that are more than 5cm long are grade B. Erosions that connect between two or more mucosal folds are grade C. (4) Severe erosions involving the circumference of the esophagus are Grade D. A study showed that patients with esophagitis experienced nocturnal acid reflux which can lead to peptic strictures or Barrett’s esophagus. (5) Only about 30% of GERD/LPR patients have erosive esophagitis. (6) 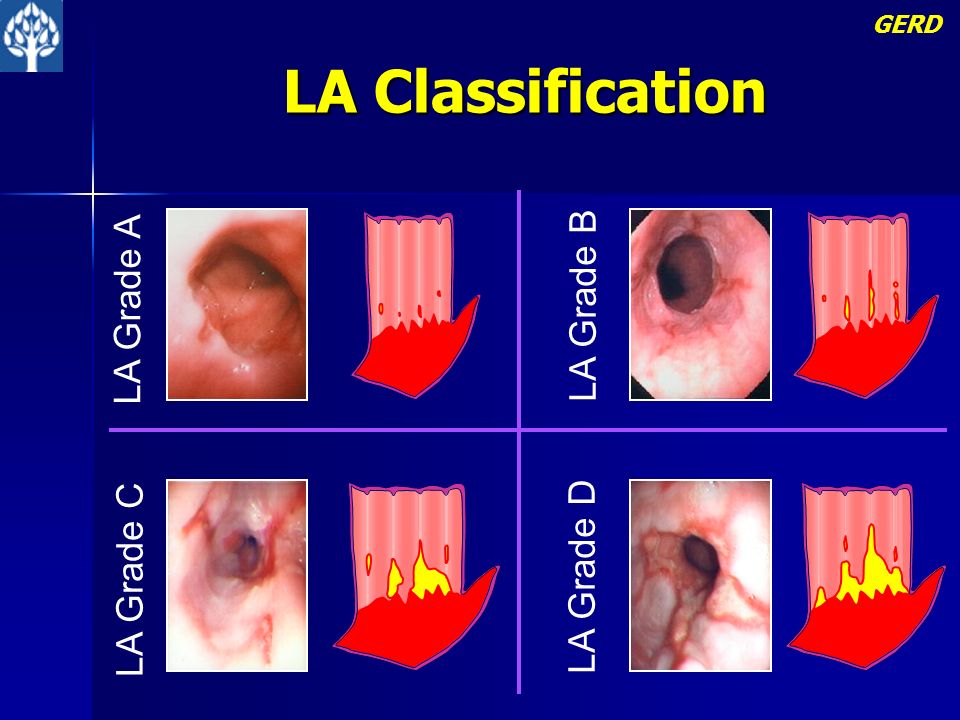 Most GERD Patients Don’t Have Esophagitis

Therefore, most GERD patients are diagnosed with what’s called non-erosive reflux disease(NERD). (1) (6) “NERD” patients show no signs of injury to the esophagus in endoscopic examinations yet still suffer refractory GERD/LPR symptoms and an impairment on quality of life similar to ERD patients. (3) (7)

NERD is somewhat of a mystery to the medical community and its pathology is not fully understood. For decades NERD was seen as a disease that progressed to ERD, if left untreated, but recent research has indicated that NERD and ERD may be two distinct diseases. (2) (3) A study showed that NERD patients taken off of reflux medication do not progress to ERD but relapse back to NERD symptoms. (3)

A progression from NERD to severe ERD however, is possible and well known but this represents a minority of patients. (2) A study of NERD patients reported 24.9% progressing to grade A/B ERD and only .6% to grade C/D ERD. (2) Most NERD patients remain stable long-term. (2)

Peptic Strictures
Chronic esophagitis can lead to complications like peptic strictures. A peptic stricture is a narrowing of the lower esophagus caused by a thickening and scarring of tissue due to long-term ERD and acid damage. (8) (9) Peptic strictures can narrow the diameter of the esophagus by up to 13mm. The condition is typically found in older people with a long history of ERD. (10) (11) Heavy users of alcohol are also known to have a higher risk of peptic strictures. (9)

Dilation
Peptic strictures are treated with a combination of esophageal dilation and anti-reflux medication. Esophageal dilation stretches a peptic stricture out and makes the esophagus bigger so patients are able to swallow food easier. This is achieved with endoscopic tools that break or shear open thickened scar tissue in the esophagus. PPI therapy is administered with dilation to heal strictures long-term and prevent them from worsening. (9)

Dilations are performed gradually with a slightly larger dilator each time to minimize the risk of esophageal rupture. Strictures are generally dilated no more than 3 times per visit. (9) 80% or more of patients will experience relief from dysphagia but up to 30% may need another dilation within a year. (9)

There are two types of esophageal dilators used to treat peptic strictures: balloon dilators and mechanical dilators. (8) (9) A balloon dilator is a tubular tool with a deflated balloon attached to the end. It is passed through the mouth with an endoscope and inflated with air or water once inside the stricture. Balloon dilators work by breaking open thickened scar tissue and pushing the entire structure out towards the walls of the esophagus.

Mechanical dilators are also tubular but are tapered on one end. They work by applying longitudinal and radial pressure as they are pushed through the peptic stricture to open the esophagus. (9) The most commonly used dilators are the Mahoney and Savary-Gilliard dilators.

The Mahoney dilator is made out of rubber and is filled with mercury or tungsten. (8) It is used for simple strictures that are relatively easy to dilate.