Is Gaviscon Effective at Treating GERD? 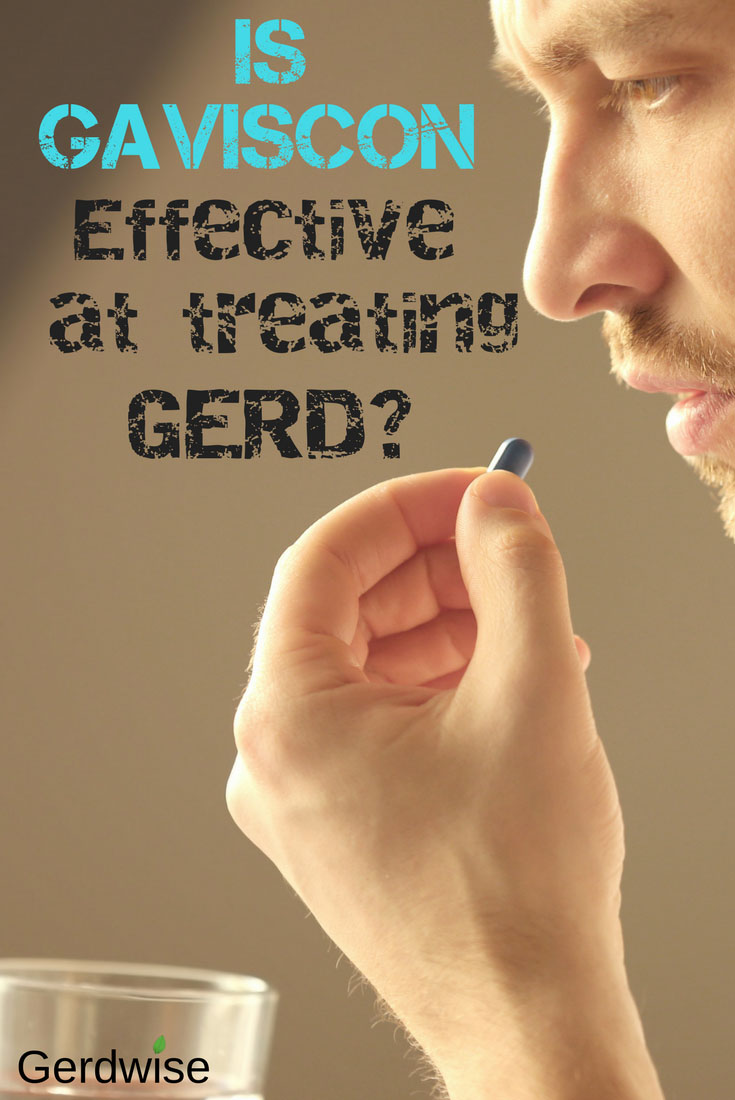 Ever heard of Gaviscon? You probably haven’t if you were recently diagnosed with GERD. Nowadays doctors use PPIs(Proton Pump Inhibitors) to both diagnose and treat GERD (gastroesophageal reflux disease).

Typically, if a doctor thinks you have GERD he/she will instruct you to take PPIs, a drug that inhibits stomach acid production.

In fact, most doctors often send you home with a prescription for double the PPI dose to test out their theory again.

Unsurprisingly, many people do not get better, and some end up worse than before.

New refluxers are typically unaware that PPI medications are dangerous.

While short-term use seems to be less harmful, long-term use has been associated with a laundry list of health risks like osteoporosis, vitamin deficiency, kidney damage, and cardiovascular disease. (1)

Moreover, many studies have shown that PPIs are ineffective at treating LPR symptoms. (2)

With that being said, it is important to note that PPIs can help some people who have esophagitis and Barrett’s Esophagus.

Gavison is sort of a rival to PPIs. It’s more popular in the UK than the US and has actually been shown to be more effective than PPIs in some studies. In this article, I will talk about what Gaviscon is, how it works, how effective it is, and whether or not it’s safe to use.

You should consult with your doctor before taking Gaviscon to make sure it’s safe for you.

Gaviscon is a drug that was created in the 60s to early 70s in order to treat acid reflux/LPR disease.

Once ingested, Gaviscon reacts with your stomach acid to form a gooey, stringy polymer mass. The sodium bicarbonate in Gaviscon then causes the polymer mass to float up towards your lower esophageal sphincter.

This polymer mass called a “raft,” forms a barrier in the upper part of the stomach, effectively blocking stomach acid from flowing back up. (5) (6) Gaviscon works for up to 4 hours.

Researchers have always known that reflux symptoms were caused by stomach acid. but for a long time, they could not figure out why or how, since stomach acid was the least damaging immediately after a meal.

In 2001, researchers believed they found the answer. They discovered something called the acid pocket, an area of acid that sits on digesting food, near the top of the stomach.

Researchers discovered that the “acid pocket” had a very acidic pH of 1.6. (7) They concluded that the acid pocket was likely responsible for reflux symptoms.

The Gaviscon raft is thought to prevent acid reflux by coming in contact with the acid pocket and disturbing it. Upon contact, the raft actually neutralizes the acid pocket with ingredients like sodium bicarbonate.

One study even indicated that Gaviscon may be an effective treatment for LPR, something PPIs are notoriously ineffective at treating. (18) (19)

Another plus of Gaviscon is that it seems to be pretty good at treating acid reflux in pregnant women.

In one study, over 98% of pregnant patients experienced some symptom relief using Gaviscon.

Interestingly, over 80% of the pregnant patients in this study were in their third trimester of pregnancy. This suggests a significant number of pregnant women experience troublesome reflux symptoms in the final stages of pregnancy (20) (21) (22).

However, not all Gaviscon medication is created equally. Gaviscon manufactured in the UK has reportedly higher levels of alginates (a polymer forming chemical) and acid neutralizing ingredients compared to US formulations.

As with all medication, Gaviscon does come with a few side effects.

Common ones include constipation, abdominal distention, flatulence, and nausea. (24) (25)

If you are taking Gaviscon, you should monitor your health and progress with your doctor. Though uncommon, Gaviscon can cause intestinal obstructions and growths further down the road. (26)

But still, Gaviscon seems to have fewer side effects compared with PPIs. That’s a big selling point for me.

Could Gaviscon confirm a GERD Diagnosis?

Technically a refluxer on Gaviscon should experience some degree of symptom relief.

Unlike PPIs, which inhibit acid secretion, Gaviscon forms a protective barrier in your stomach to keep acid from refluxing back up.

It’s inevitable chemistry. When you combine Gaviscon with stomach acid, it should react and create a polymer raft that floats up to the upper stomach. This should block acid and even pepsin to some degree.

A person who experiences no relief from reflux symptoms after taking Gaviscon for some time may need to reevaluate their GERD diagnosis with their doctor and look into other possible causes.

There’s nothing natural about a glob of synthetic polymer floating around in your stomach. The fact that Gaviscon contains potentially harmful ingredients like sucrose doesn’t impress me either. I wouldn’t be surprised if we found more side effects from Gaviscon use further down the road.

But if I could do it all over again, I would definitely choose Gaviscon over PPIs.

The studies are clear. Gaviscon works for many people and has fewer side effects. In some cases, Gaviscon may even work better than PPIs.