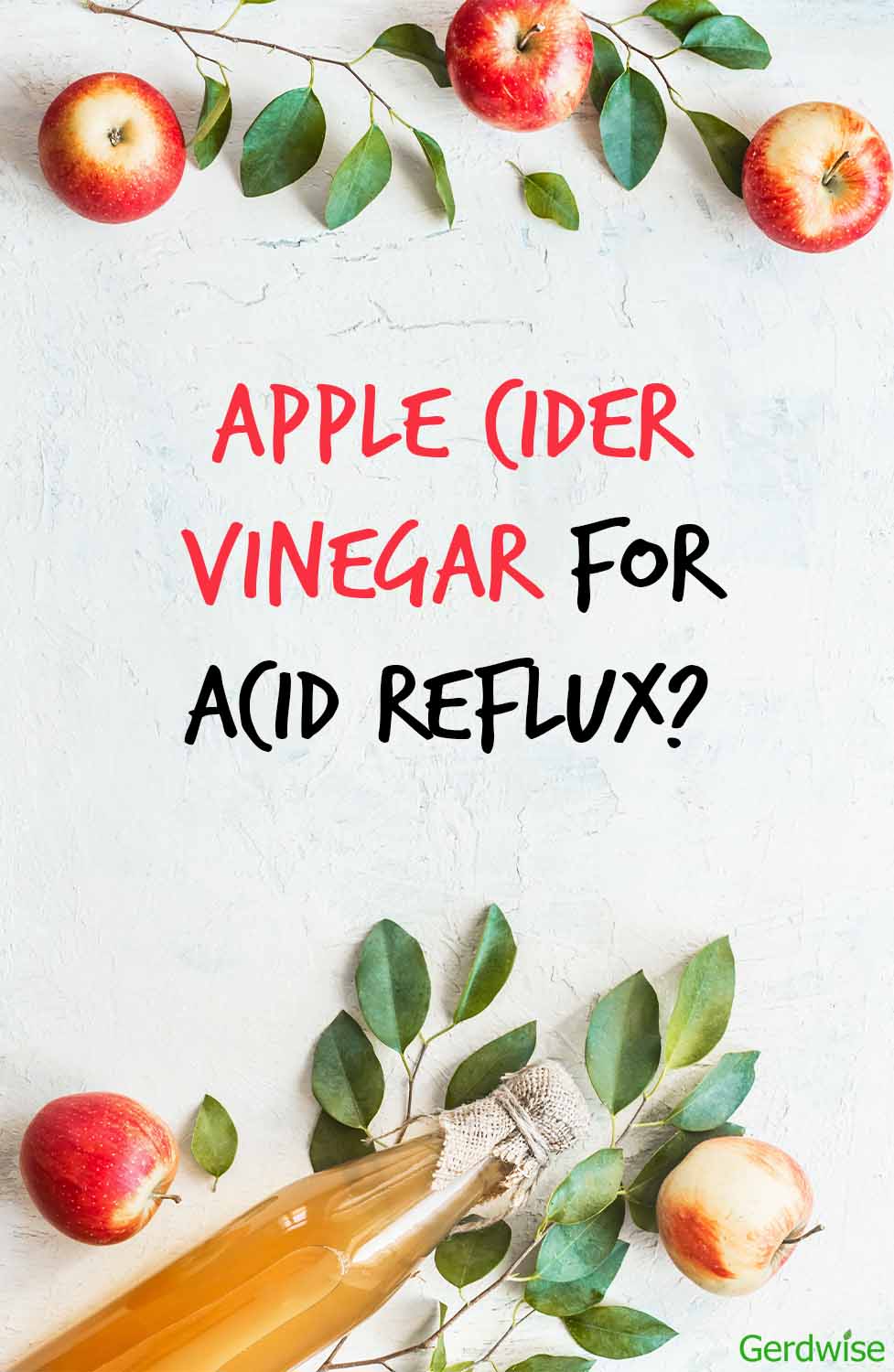 *Please remember to consult your doctor before you attempt to come off PPIs, ESPECIALLY if you have complications such as peptic ulcers, strictures, esophagitis, Barrett’s Esophagus, or cancer.

Apple cider vinegar is a commonly touted natural remedy for acid reflux. Some people will swear by it. Others swear against it. And still others remain somewhat neutral, saying that apple cider vinegar MAY “balance” out stomach acid, all the while maintaining there is no “guarantee it will work.”

Interestingly, those who advocate drinking apple cider vinegar for acid reflux claim GERD is not due to TOO much stomach acid, but rather TOO LITTLE stomach acid.

OK, great, but what does the research say? That’s what we’re going to talk about in this article.

Is Too Much Stomach Acid a Thing?

Let’s start with “too much stomach acid.”

First of all, there isn’t actually anything in current medical literature that suggests the majority of gastroesophageal reflux disease(GERD) is caused by TOO MUCH stomach acid(also called hypergastrinemia).

Studies in the past(way back, like in 1956-back), have referred to reflux as “hyperacidity,” but today that term is largely antiquated when discussing reflux in the West.

The more commonly used term is hypergastrinemia, and its non-pharmaceutical induced cases are exceedingly rare.

According to the National Institute of Diabetes, Digestive, and Kidney Diseases in the US, the prevalence is only .5 to 3 per MILLION.

In other words, also exceedingly rare.

How About “Too Little” Stomach Acid?

What about too little stomach acid? Is that a thing?

It is, but not in the way you may be thinking.

According to Dr. Rai Kohli of the Kansas City VA Medical Center, only 1 to 4.7% of healthy people have hypochlorhydria and achlorhydria. Many other studies also back these numbers up, though I will mention it’s probably tough to suss out the people who are taking acid-suppressing drugs.

Speaking of acid-suppressing drugs, did you know PPIs(proton pump inhibitors) cause both hypergastrinemia AND hypochlorhydria? What a deal! Two for the price of one!

Not really. But let’s take a brief detour now and talk about how PPIs can actually give you hypergastrinemia AND hypochlorhydria.

First, let’s start with the fact that PPIs can actually give you hypochlorhydria, also known as “low stomach acid.”

By drastically cutting down your stomach’s ability to produce acid.

For instance, did you know proton pump inhibitors “inhibit” 2/3 of the acid-activating proton pumps in your stomach?

Only about 1/3 of your proton pumps are allowed to pump acid…so guess what?

Forgive the biting sarcasm but I think this medical fact is pretty ridiculous.

As mammals, we need stomach acid to digest food, so is it any wonder that suppressing the very thing our bodies need to digest food would be a not-so-good thing?

Further, it appears that PPIs can also give you indigestion(dyspepsia).

As a matter of fact, it is well known in the medical literature that there is a huge overlap between dyspepsia and reflux symptoms, yet this is rarely mentioned(I’ll talk about a “recipe” I have that can help jumpstart your appetite if you struggle with that, so keep reading…)

Secondly, PPIs can give you hypergastrinemia. They do this by chemically increasing the production of gastrin, a hormone involved with acid secretion in the stomach.

You see, when your body detects that the pH of the stomach is high and therefore insufficient to digest food, it stimulates more gastrin which should technically lead to more acid secretion in the stomach to bring the overall pH down.

But does this happen when you’re on PPIs? Noo.

No, it doesn’t, because PPIs again, block the proton pumps in the stomach from pumping out acid(for the full explanation, check out my masterclass here).

Because most of the proton pumps are blocked from secreting acid, gastrin keeps building up in the blood or at least the stomach, for a significant amount of people.

So essentially you get this “back pressure” of gastrin build-up because your body thinks it needs more acid to digest food(which it does), so it keeps trying to make more, yet it cannot consummate the process by finally releasing acid into the stomach because it’s being blocked by PPIs.

So what happens when you stop taking PPIs?

All that suppressed gastrin gets released “from the deep” and goes straight to the proton pumps in your stomach. The difference this time is the blockage has been removed. No more PPIs.

SURPRISE! Nope, because of that build-up of gastrin “mainlining” into the proton pumps, you could very well experience “hyperacidity,” also known as rebound reflux.

So in this case, “too much acid” is actually induced by pharmaceutical drugs. And I argue that drug-induced hypergastrinemia is far more common than more obscure diseases like Zollinger-Ellison Syndrome because GERD is THE most common gastroesophageal disease in the West.

Currently, the prevalence of GERD is estimated to be around 30%. There are roughly 330 million people in the US as of 2020.

30% of 330 million is 99 million(yes, babies too, have been prescribed PPIs for years now). And according to a study done on rebound reflux in 2009 by Dr. Reimer et al., the occurrence of rebound reflux in healthy volunteers is GREATER than 40%.

So that’s potentially 40+ million cases of rebound reflux and hypergastrinemia in the US alone. I’m not even including the rest of the West(Canada, the UK, Australia, and New Zealand. Let alone the rest of the world).

As you can see, the incidence of hypergastrinemia is much more likely to be pharmaceutically induced(greater than 40% vs 1%).

OK, on to the health benefits of apple cider vinegar. We all know apples are healthy—do you concur?

Obviously, apples are filled with all sorts of great things such as Vitamin C, Vitamin B6, a fair amount of dietary fiber, and even a bit of magnesium, calcium, and iron to spare.

Some even claim that the fermentation process apple cider vinegar undergoes, produces “the mother,” a potent combination of healthy digestive enzymes and probiotics.

And as the old adage goes, “An apple a day keeps the doctor away(unless you’re my ol’ friend Frankie who says he has no desire to keep his doctor away because he thinks his doctor is smoking hot. No apples for you then Frankie).

Here’s one thing we do know for sure about apple cider vinegar: it can speed up weight loss!

In his book, “How Not to Diet,” Dr. Michael Greger of NutritionFacts.org covers how incorporating vinegar into your diet can actually lead to fast and almost effortless weight loss, specifically around the abdominal region(visceral fat).

Through something called adenosine monophosphate-activated protein kinase(AMPK for short. It’s an enzyme that is activated through various metabolic processes such as smoking, drinking, nightshade eating, and aerobic exercise). For more information about AMPK and fat loss tips in general, get Dr. Greger’s book, “How Not to Diet.”

But for the purposes of this article, just know that AMPK is an enzyme that tells the body to lose fat.

Apple cider vinegar also contains something called acetic acid that leads to the production of AMPK and this leads to more abdominal and visceral(around the organs) fat loss!

Even more spectacular is the fact that when the apple cider vinegar participant’s body fat composition was analyzed with a CT scan, they were found to have less visceral belly fat!

So if you’re looking to lose some weight—2 tablespoons of apple cider vinegar disbursed evenly through your meals might just do the trick!

Apple cider vinegar is acidic, isn’t it? How is this going to help my acid reflux?

Well, if you have PPI-induced hypochlorhydria(“low stomach acid”), you may also be suffering from dyspepsia or indigestion. And as I already mentioned before, what can cause you dyspepsia is when you don’t have enough stomach acid to properly digest food, or if you just have poor digestion in general caused by stress and other environmental factors.

Markers of dyspepsia or indigestion include constipation, lack of appetite, bloating(acid reflux!), and more.

So what can you do to counteract poor digestion?

I’ll tell you what I did after I came off PPIs to begin healing my digestion.

I made an appetite stimulator and sipped on it daily right before a meal. Can you guess a primary ingredient I used?

*Warning: If you have LPR, sore throat, or throat sensitivity, you want to take it slow, or avoid this altogether if you are too sensitive to lower pH foods.

*The following concoction is inspired by the doctor dude I saw on Youtube years back. Sadly, I do not remember this dude’s name nor can I find him anymore(sorry doctor dude!), but for the record, I’d like to give him the credit.

Anyway, here’s my next-level appetite stimulator—inspired by a doctor dude…

2. Add in 1 tablespoon of lemon juice.

3. Now add in 3 teaspoons of apple cider vinegar and stir.

4. SIP VERY SLOWLY. As if the fluid your lips are partaking in is scalding hot. This is to avoid potentially irritating your already sore throat and exacerbating your LPR symptoms by accidentally drinking too much.

5. Sip until you feel a slight burning sensation in your stomach or until you start to feel hungry. Then stop and eat your food.

7. If you feel the concoction needs to be stronger, you can add 1 more tablespoon of lemon juice + 1/4 cup more water and see how that works for ya. Personally, I’ve found that the original recipe is just right.

*By the way if you’re sipping this stuff and experience no LPR symptoms—well that kind of puts a damper on the pepsin theory now doesn’t it? More on this in the future…

Sum it up for us Stu

1. Non-drug induced hyperacididty(a.k.a “too much acid”) is rare.

2. So is non-drug-induced hypochlorhydria, though less rare.

3. PPIs, or for that matter, ANY drug that screws with the pH of your stomach INCLUDING H2 blockers and alginates could potentially cause hypergastrinemia through rebound reflux(much more common) or at the very least contribute to hypochlorhydria(a.k.a “low stomach acid”), which is very common.

4. Apple cider vinegar is good stuff that can help you lose the pounds and potentially help your digestion by stimulating your appetite.